On Thursday, December 12, 2019, at the Marian Center, in North Syracuse, Mr. Richard Fitzgerald will present an introduction to the great Dominican friar Fr. Vincent McNabb. Fr. McNabb was a close friend of Hilaire Belloc and G.K. Chesterton and together they represent the intellectual foundation of the Catholic economic school of Distributism.

Thursday's class will focus on the impact of the English Industrial Revolution and Hilaire Bulloc's book The Servile State. The Servile State had a significant impact on the development of Fr. McNabb's economic thought.

Anti-Catholicism in the United States

This month's presentation will focus on the history of anti-Catholicism in the United States. Special attention will be given to modern anti-Catholicism from the Progressive era to the present. The lecture will also address the Catholic Anti-Catholicism of Catholic politicians and the cultural elite.

Our Monthly Meeting, Sept 15, 2019, at
Central New York Marian Center, 5180 W. Taft Rd, Liverpool, NY
Rosary at 1:30Followed by Signs of the Times Mary Kay Welgoss will give a presentation on St. Thomas MoreWe close by singing Vespers at 4:00Inquirers and guests welcome
Posted by Lou Pizzuti at 8:16 AM

The Nativist Movement in the United States 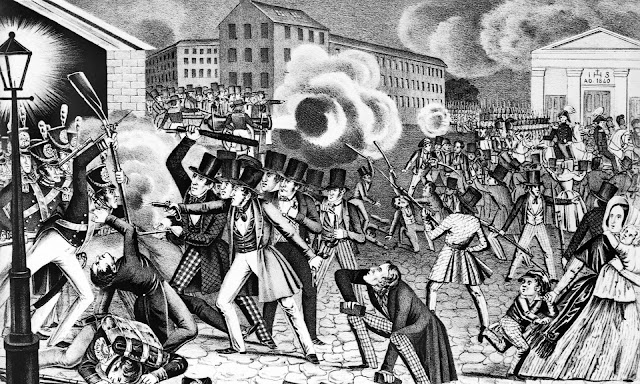 Antipathy toward Catholics in the United States in the nineteenth century was manifested in the Nativist movement of the 1830's and 1840's and the Know Nothing Party of the 1850's.

The lecture will examine the origin of Nativism.

It will also focus on the violent attacks against the Ursuline convent in Charleston, Massachusetts in 1834 and the Bible Riots in Philadelphia in 1844.


Our President, Dick Fitzgerald, will deliver the lecture.

The presentation will begin with an overview of the life of St. Elizabeth Ann Seaton--focusing on her conversion and work for the Church.

The class will then explore the significant impact of Catholic voters during the period from the election of Thomas Jefferson in 1800 through the administration of Andrew Jackson.

Where?
Central New York Marian Center
Posted by Lou Pizzuti at 11:04 AM

Due to Easter falling on the third Sunday of April this year, our monthly chapter meeting has been moved to the second Sunday, April 14
Posted by Lou Pizzuti at 8:27 AM

The Glorious Revolution and the Development of Catholic Political Philosophy

On Thursday evening, April 11 2019, at the Syracuse Marian Center, Mr. Richard Fitzgerald O.P. will resume his class on the History of the Catholic Church in the United States. The meeting will begin with prayer at 6:30 PM followed by the lecture described below.

The Glorious Revolution and the Development of Catholic Political Philosophy

This months presentation will focus on the Glorious Revolution of 1688-1689, which unleashed widespread persecution of Catholics in the British North American colonies. Chapels were closed, the celebration of Mass and the sacraments were outlawed, and Roman Catholics were denied the right to vote and hold political office.

The lecture will also explore the Catholic response to this oppression. Roman Catholics in the colony of Maryland developed a Catholic counter-revolutionary society and a political philosophy based upon the writings of St. Thomas Aquinas, Francisco Suarez, Juan de Mariana and Catholic Natural Law Doctrine. This school of thought formed the foundation of Catholic political philosophy during the American Revolution.
Posted by Lou Pizzuti at 10:40 AM