Third Sunday in Lent, according to the Byzantine Usage. The Exaltation of the Holy Cross

Apostle: (Heb 4,14-16;5,1-6) Brethren: Since we have a great high priest who has passed
through the heavens, Jesus, the Son of God, let us hold fast to our confession. For we do not have a high priest who is unable to sympathize with our weakness, but one who has similarly been tested in every way, yet without sin. So let us confidently approach the throne of grace to receive mercy and to find grace for timely help. Every high priest is taken from among men and made their representative before God, to offer gifts and sacrifices for sins. He is able to deal patiently with the ignorant and erring, for he himself is beset by weakness and so, for this reason must make sin offerings for himself as well as for the people. No one takes this honor upon himself but only when called by God, just as Aaron was. In the same way, it was not Christ who glorified himself in becoming high priest, but rather the one who said to him: “You are my son; this day I have begotten you”; just as he says in another place: “You are a priest forever according to the order of Melchizedek.” 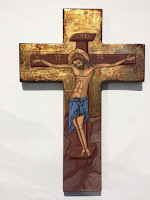 Gospel: (Mk 8,34-38;9,1) At that time, Jesus summoned the crowd with his disciples and said to them, “Whoever wishes to come after me must deny himself, take up his cross, and follow me. For whoever wishes to save his life will lose it, but whoever loses his life for my sake and that of the gospel will save it. What profit is there for one to gain the whole world and forfeit his life? What could one give in exchange for his life? Whoever is ashamed of me and of my words in this faithless and sinful generation, the Son of Man will be ashamed of when he comes in his Father's glory with the holy angels.” He also said to them, “Amen, I say to you, there are some standing here who will not taste death until they see that the kingdom of God has come in power.”

Take a look at the iconostas, if you would. There are two side doors. They’re called Deacon Doors because each has an icon of an early deacon.


This one, on the left, is St. Stephen, one of the first seven deacons. Shortly after his ordination, scripture tells us, “full of grace and power, [he] did great wonders and signs among the people”. The Jewish authorities at one particular synagogue didn’t like that, so they made false accusations against him and brought him before the high priest. Given that opportunity, he preached the Gospel, and the people were enraged and took him outside and stoned him to death.

The other one, St. Lawrence of Rome, was arrested in a great purge of Christian clergy from the City of Rome, when the Empire was still pagan. The emperor had demanded that he produce the church’s silver and gold. Lawrence asked for three days to gather the riches. He eventually returned with the poor and sick, people who were cared for by the church, remembering that Christians are to recognize Christ in the poor.

Upon hearing Lawrence explaining that the Church’s riches, her silver and gold, were the poor and sick of society, Emperor Valerian flew into rage and condemned Lawrence to death – not by beheading, which had recently been the fate of Pope Sixtus. No, not by beheading, but by being burned alive in public, on a griddle. So filled with grace was Lawrence that, at one point, he joked with his executioners while being cooked.

Both of these saints show us how to live out Christ’s words in the gospel: “For whoever wishes to save his life will lose it, but whoever loses his life for my sake and that of the gospel will save it”.

Stephen didn’t know that he would be martyred – at that point, there were no martyrs. But there had been persecution. But do you really think that they would like it when he said, “You stiff-necked people, uncircumcised in heart and ears, you always resist the Holy Spirit. As your fathers did, so do you. Which of the prophets did not your fathers persecute? And they killed those who announced beforehand the coming of the Righteous One, whom you have now betrayed and murdered, you who received the law as delivered by angels and did not keep it.”

He did not seek to save his life, but offered his life for Christ.

But Lawrence? Lawrence knew that he would be martyred. Just a four days earlier, Pope Sixtus had met a martyr’s death.

Like Stephen, Lawrence did not seek to save his life, but offered his life for Christ.

In our society today, opportunities to follow Christ in martyrdom are not all that common. But that doesn’t mean that there aren’t other ways that He’s given us to follow him and become free of our attachment to things of this life.

Jesus says you must deny yourself. That’s what Lent is – training, practice in denying yourself. Our Lenten fast is not nearly as difficult as it was in times past. Oil was not permitted. There was no dairy from the Sunday before Lent until Pascha, and no meat from the previous Sunday (after all, that’s why they’re called Cheesefare and Meatfare Sunday). But, nevertheless, the modern rules of no meat on Friday and no dairy on Good Friday – that’s still self-denial.

Then He tells us to take up our cross. I don’t know about you, but I don’t want to carry an instrument of torture and death, especially not one specially tailored to fit me. But I have to. And, you have to, if you are to come after Him.

Maybe it’s something in your job situation that is difficult. Maybe it’s a personal relationship – it might be an overly demanding person who often needs your help, and there’s nobody else they can turn to. There are many things that can become a cross for you. And it becomes a source of suffering, and source of self-denial.

But a cross is not only a source of suffering and self-denial. St. Paul wrote to the Colossians, “Now I rejoice in my sufferings for your sake, and in my flesh I complete what is lacking in Christ’s afflictions for the sake of his body, that is, the church”. Think about that – when you accept the suffering that comes from self-denial and carrying your cross, God makes that a conduit for His grace.

When Stephen was being martyred, there was a young man guarding the cloaks of those doing the stoning. His name was Saul of Tarsus. We know him better by his Roman name, the one he used after his conversion – St. Paul.

And Lawrence? The tradition records massive conversions to the Christian faith as a result of the holy life and death of one Deacon who understood the true heart of his vocation.

By not seeking their own lives, but offering them to Christ, these saints became examples to us and seeds of the Church's growth.
And if you don’t take up your cross? St. Alphonsus de Liguori teaches “what does he gain who refuses his cross? He increases its weight”.

So, my brothers and sisters, what will it be? Will you take advantage of what remains in Lent, learning to deny yourself, pick up your cross, and follow Christ? Or will you refuse your cross and, by doing so, increase its weight?
Posted by Lou Pizzuti at 1:36 PM